When growing plants in a grow tent or room, you need to provide good ventilation for your plants. There are fans that are specifically designed for this purpose. Taking note of factors like price, size, CFM, etc. can be helpful for picking the one that suits your needs. We looked at some fans that have great specs. 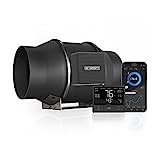 The AC Infinity CLOUDLINE T6 Inline Duct Fan is arguably the best inline fan for a grow tent. It is easy to control and has a CFM of 351. Its 351 CFM should be ample for a medium-sized grow tent. And the central control system makes controlling the fan a lot easier than others.

Here’s a checklist of things to have in mind now that you’re about to purchase an inline fan for your grow tent.

There are different diameters of inline grow fans. The ones available on the market include the 4-inch, 6-inch all the way to 12-inch. To get the nearest accurate size that will fit your grow tent/room, there’s a formula. First, find the cubic feet of the grow tent/room where the inline fan will be installed. To do this, multiply the length, width, and height of the room/tent.

For instance, a 4ft grow tent may have dimensions such as 4ft x 2ft x 5ft. Its cubic feet will be 40ft3.

A grow tent with the aforementioned dimensions will need an inline fan of about 4-inches most of which have a CFM of about 190 – more than enough for the tent. In the review below, we included some larger inline fans for people who have large grow rooms and larger grow tents.

Airflow is measured in Cubic Feet per Minute and this means the amount of air the fan can move in a minute. The best way to choose an inline fan with the right CFM is by knowing the volume of your tent. If the volume is high, you might want to consider buying a fan with a high CFM.

No one likes noise especially when it involves appliances used in the house. Inline fans have different levels of noise often stated in their product descriptions. Ensure you check the noise level of the inline fan you want to buy. It is also important to note that the faster the speed you set the fan to blow at, the more noise it makes. On the other hand, the lower the speed, the lower the noise.

There are a ton of cheap inline fans available on the market and there are also expensive ones. Choose what meets your budget and what will work for your grow room/tent.

In the lines that follow, we shared our thoughts on some of the best inline fans for grow tents. Take your time and find that perfect fan that suits your needs.

The fan has a CFM rating of 351 – the same as the CFM on the Cloudline S6 model which closely shares a lot of features with. With regards to features, the Cloudline T6 fan packs a handful of them. Some of these features include an easy-to-use control center that allows you to program the humidity and temperature settings into the unit. Aside from that, you can also control the alarm, timer as well as fan speed.

The fan on the Cloudline T6 is powered by a DC motor. During operation, it is noticeably audible. It’s rated 32dBA as the sound level. You must, however, bear in mind that the sound level increases when the fan speed increases. Overall, the build quality is good. The fan comes with other items such as a sensor probe, power plug, and duct clamps. 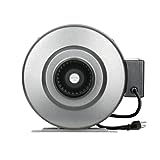 The last time we saw a product from iPower, it was an iPower grow bag for growing tomatoes. This time around, we want to take a look at an iPower 4-inch inline fan. For a considerably low price, the iPower 4-inch offers great value whilst helping you save a few bucks. It does so with a few shortcomings.

First, the fan is a tad loud – louder than some of the fans it falls into the same price range with. In fact, it is slightly louder than the FormLine 6-inch inline fan which we reviewed below. That aside, its CFM rating – 190 CFM – Is small compared to what you’ll find on similar models. It will, however, serve you’re your small or medium-sized grow tent with little hassles.

The iPower 4-inch inline fan comes with all that you need to set it up. That’s not all – you also get to enjoy lower energy consumption.

Features: Lightweight, affordable, made from sturdy plastic materials, can be set up in minutes, can serve as a fan for the attic.

For the price, we didn’t expect a steel material, and the fan didn’t let our expectations down. It’s made using plastic materials that will probably not last more than five years – just my opinion. The fan is relatively quiet during operation at faint speeds, but at full power, you get an audible hum. Some would categorize it as a not-so-silent fan.

With respect to airflow, the fan has a 390 CFM rating. Connecting the fan with other appliances is possible. You can even install the fan as an attic fan or as a bathroom fan as the case may be. Generally, it’s a good fan with a few bad quirks that are worth neglecting considering its price range. If you want something better, go for Terra Bloom, Power, or AC Infinity fans. 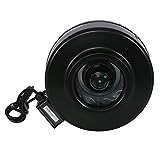 Features: Commercial-grade quality, quiet during operation, can be used as an attic fan, easy to install, has 1060 CFM.

The Hurricane Inline fan is undoubtedly the best inline fan for large grow tents and rooms. For an inline fan that has a CFM rating of about 1060, it’s definitely more than enough for most of the large-sized grow tents on the market. Its build quality is appreciable, no doubt, as it is made with a combination of high-quality materials.

The fan is made from steel and dons a finish that looks like a powder-coated finish. This fan is available in different sizes ranging from 4-inches all the way to 12-inches. Similarly, the CFM rating of the respective fans increases from 171 all the way to 1060. This Hurricane inline fan lacks controls of its own – you can’t control the speed and the climate.

However, the fan is compatible with controllers that can help you control such factors. So if you’d like to control the fan’s speed, for instance, a dimmer switch will come in handy. In addition to that, the fan is also compatible with an air duct. This is especially important if you want to regulate the air in the tent and the environment around the tent.

There’s one warning on the instruction manual of this fan which you should not neglect. If your grow tent is outside your house, say on the backyard lawn or porch, you should make sure the fan isn’t exposed to the sun, snow, or rain. You risk damaging the fan if these weather elements come in contact with it.

Which of the aforementioned inline fans for grow tent are you willing to spend your money on? Share your thoughts using the comment section below.