The bedrock of any healthy indoor plant is the type of soil you grow it in. An experienced gardener knows that the land he chooses is the cradle of growing beautiful and healthy plants in raised beds. Though you can provide adequate water and light for your plants, without the right soil, they will not thrive. Here are three recommended potting soils for growing tomatoes. 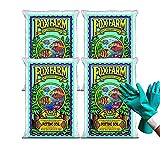 To grow healthy and juicy tomatoes, especially in raised beds, you need the proper nutrients. Thus, the first thing you need to consider is the nutrient content of the potting soil you want to buy.

Nitrogen, phosphorus, and potassium are the primary nutrients for tomato and the main ingredients in fertilizer. The growth and chlorophyll production of tomatoes is dependent on the nitrogen content of the soil.

Phosphorus, on the other hand, helps tomatoes produce energy and cope with stress from the environment. Lastly, potassium helps in photosynthesis, fighting off diseases, and the quality of the seeds.

The secondary nutrient needs of tomatoes include calcium magnesium and sulfur. They need these nutrients in fewer quantities compared to the primary nutrients.

Sulfur is used in making amino acids and proteins. However, its deficiency causes yellow leaves. Other nutrients that tomatoes need to grow are micronutrients which are required in a small amount. These nutrients include iron, zinc, boron, chloride, copper, molybdenum, and manganese.

Read The Other Things To Consider

Growing tomatoes is very easy, even in raised beds. Yet, you still need to use the right soil for the best result. You can use just about any type of potting soil to grow tomatoes in raised beds except those with heavy clay.

Clay is notably difficult for roots to grow in because it’s hard and prevents smooth water movement. Loam, on the other hand, is ideal for growing tomatoes and other plants, even tomatoes. It offers the right ingredients for moisture, nourishment, and plant growth.

The ideal soil for tomatoes should retain nutrients and moisture. Inorganic potting soils, for example, contain peat moss that helps them retail nutrients.

Ultimately, the density of the potting soil you choose to use for tomatoes in a raised bed is significant. The lighter the soil, the better, as it will offer adequate air circulation and provide the right density for tomatoes.

Yet, unlike the native soil of tomatoes, some potting soils lack living organisms that aerate the soil and break down microbes. However, potting soil manufacturers make up for this by adding earthworm cast and other organic or inorganic materials.

There are two types of potting soils to choose from – organic and inorganic. Organic potting soils are more substantial, made using organic matter, and more expensive than inorganic ones.

Inorganic potting soils are manufactured from industrially-made ingredients. But they lose their nutritional value faster compared to organic potting soils, which are reusable. Once you’ve made your choice – organic or inorganic – considering other essential things become more comfortable.

Research shows that tomatoes grow best in soils with good drainage compared to waterlogged soils. This fact means you have to buy potting soil with average moisture retention and one that won’t get waterlogged.

Furthermore, watering is essential when growing tomatoes in raised beds. To prevent the spread of soil diseases and fungus growth, its best to water tomatoes at the base.

The ideal soil pH value for growing tomatoes is between 6 to 6.8 – slightly acidic – a suitable pH range for most vegetables. The good thing about pH is that you have to test the soil before planting and after about three years.

The soil’s pH value helps you make sure it’s perfect for tomatoes to germinate in and produce fruits.

The amount of potting soil to use depends on the kind of tomato you intend to grow. Tomatoes grow down instead of growing out, but they do not grow deeply.

Ensure you plant your tomato plants in deep potting soil, at least two-thirds of the plant under the ground. This approach helps tomato plants grow the necessary root system. 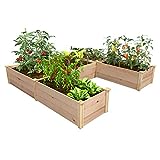 If you haven’t found a raised bed yet, we picked the Greenes Fence Premium Raised Bed. It is made from cedar, and it’s U-shaped. Setting it up is easy, and longevity is assured because cedar is rot and insect resistant.

Best Soil For Tomatoes In Raised Beds: Our Reviews

Here’s what we think about the three potting soils we mentioned above.

The Fox Farm organic potting soil is regarded by many as excellent soil. It contains excellent organic plant food for gardening, raised beds, and container growing. It does not require any form of mixing and slowly release plant nutrients for up to 3 months.

The Fox Farm soil is a combination of earth and sea in one bag – just like Aquaman. We think the idea behind it is to offer gardeners the chance to grow plants using top-shelf quality natural potting soil.

Fox Farm fills this soil with goodies. First, it contains loamy soil and natural ingredients such as forest humus and crab meal. Secondly, you’ll find ocean fish, bat guano, and worm castings in it. The result is an aerated, light, and fertile potting soil for healthy plant growth.

This soil is a 38.5-quarts potting soil with a weight of about 80 pounds. It has a soil pH value of 6.3 to 6.8, which is the pH value for the optimal fertilizer performance. Also, it does not require any additives.

Espoma’s potting soil is a vibrant organic 8-quarts potting soil for indoor and outdoor gardening. It features a Myco-Tone water-saving formula that improves water retention and is ideal for tomato growth.

The soil reduces drought stress on plants. When using organic potting soil to grow tomatoes in raised beds, you need to ensure you store it properly. Espoma designed the soil in such a way that it can be stored at room temperature to prevent mold or bugs.

Did we mention that the soil has improved moisture retention and that this reduces the sprouting time of seeds? Regarding contents, the soil contains the essential and micronutrients required to grow tomatoes.

Aside from the water retention, there’s also nutrient retention for long periods. The Espoma Organic Potting soil has the right mixture of physical, chemical, and biological matters. Its physical components are moisture retention of the soil, air circulation, and compactness.

The chemical components include the nutrients stated earlier, the right pH value, and the absence of herbicides. Lastly, the biological components refer to the abundance of organic matter – humus, and helpful soil organisms.

Premium All Purpose Potting Soil is an inorganic potting soil that offers you the expected value from the best potting soil. It’s expansive soil in large packs suitable for outdoor gardening.

Talks from experienced gardeners in different forums show that soil is key to solving most plant potting issues. But the price is on the high side, especially for starters. The soil comes in a four-pack 1.5 cu ft bag. You can use this soil for almost all potted or raised bed plant types – herbs, shrubs, annuals, and perennials.

The soil is designed to slowly release its packed nutrients along with the help of a wetting agent. It comes with premium drainage, air porosity and is formulated to produce healthy plants. And it also comes with some fertilizer, but you will need to add more to the soil as your plant develops.

The Premium All Purpose Potting Soil is a medium-weight potting which is a bit heavier than other potting soils. Due to its weight, it needs extra drainage and care to prevent waterlogging that may hinder plant growth.

The roots of a tomato plant are known to grow deep, which is why people are encouraged to buy fabric grow bags instead of plastic containers. Since they are deep drinkers, the raised bed needs to be deep. A depth and thick 12-inch soil layer will be good for the tomato.

What soil do you put in a raised garden bed?

The soil in a raised garden bed should be composed of many things, including 60% topsoil, 30% compost, and 10% potting soil. This ratio is the recommended ratio for people making their soil. Fortunately, if you purchase potting soil, they have been mixed in a better proportion than this.

Do I need to line my raised garden bed?

Yes, the raised garden bed should be lined. This lining will serve as insulation for your plants against temperature changes. It will also keep the weeds from growing where they are not wanted.

As we mentioned earlier, growing tomatoes can be a tough job, and getting things done always appear to be difficult at the initial stage. To make things a lot easier, start by making a list of the materials you need to grow, especially the soil and the raised bed.

We may earn commissions on some links.

This site uses Akismet to reduce spam. Learn how your comment data is processed.

Get connected and stay up to date on our social media platforms.